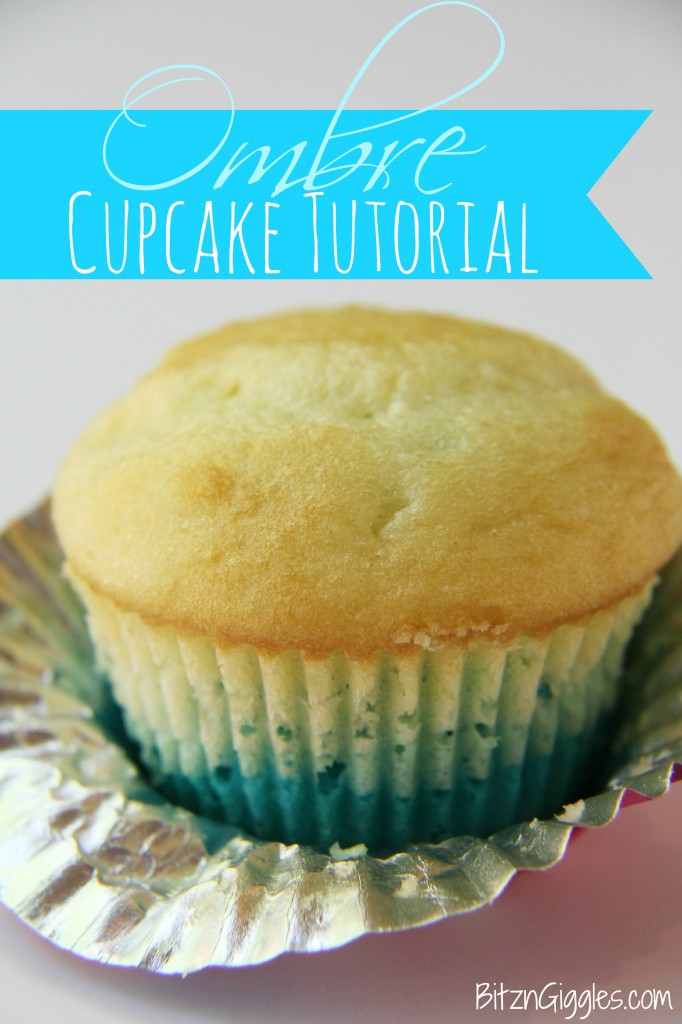 Has a piece of clothing ever inspired you to bake? No?

I can’t imagine why not {giggle}.

Nothing like that ever happened to me either until just the other day. I purchased a pretty awesome ombre shirt a few weeks ago that I absolutely love. I’ve worn it about three times already. So, to let you in on a little secret, I’m pretty much in love with ombre anything. Is ombre still in? It is, right? 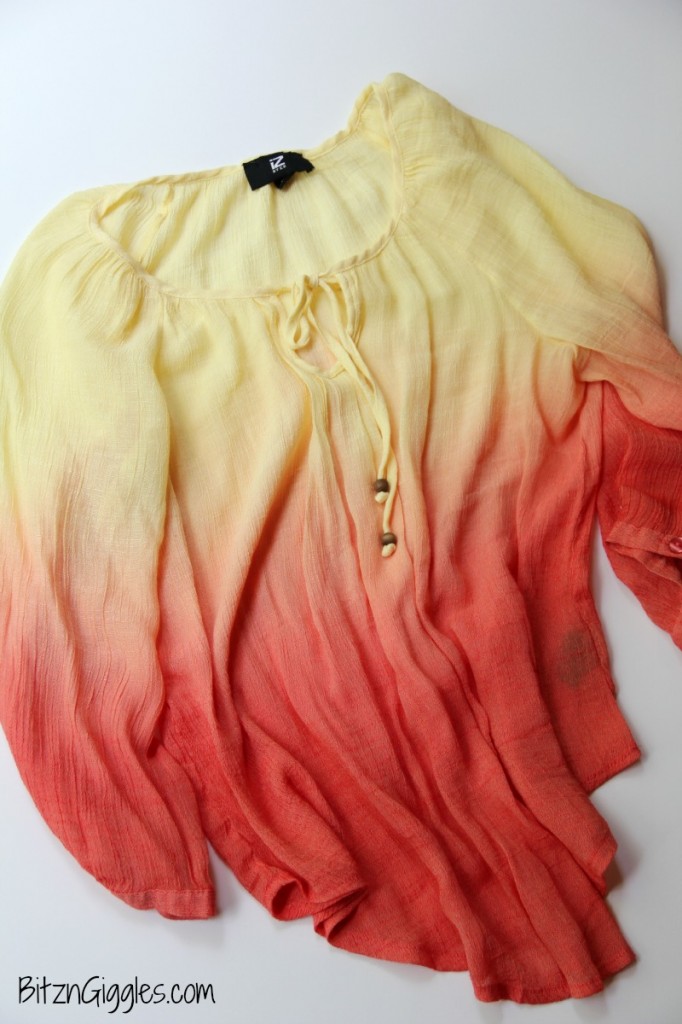 When I got the idea to make ombre cupcakes, I was wearing my shirt – and that’s the first question I asked myself. Then I thought, well, if I just purchased this shirt a couple weeks ago, then of course, ombre must still be “in.” At this point, I guess it doesn’t matter if it’s in or out. To me, variations of the same color fading from dark to light is the coolest thing ever. I’m not going to lie, my idea didn’t work out so well the first time. My creation turned into more of a tie-dye effect. Still pretty, but not exactly what I was looking for. I studied my cupcakes while my son, Dane, watched me.

There was silence. He sat there eating his unfrosted cupcake while I peered into the inside of it. Ahhh Ha!  I knew what I had done wrong.

Oh, my children. How I love them so. You bet I frosted the next batch because they DID turn out! And here’s the method that I used: 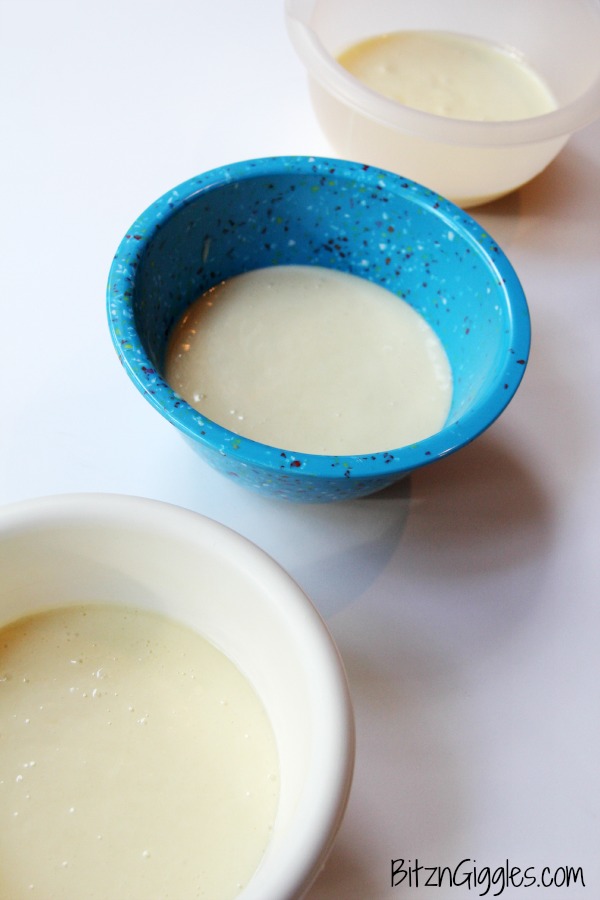 Here’s where you run and get some food coloring. I used blue because it’s my favorite color AND I thought it would be the perfect touch to the special cupcakes I was making. Here’s how you’ll want to add the food coloring: 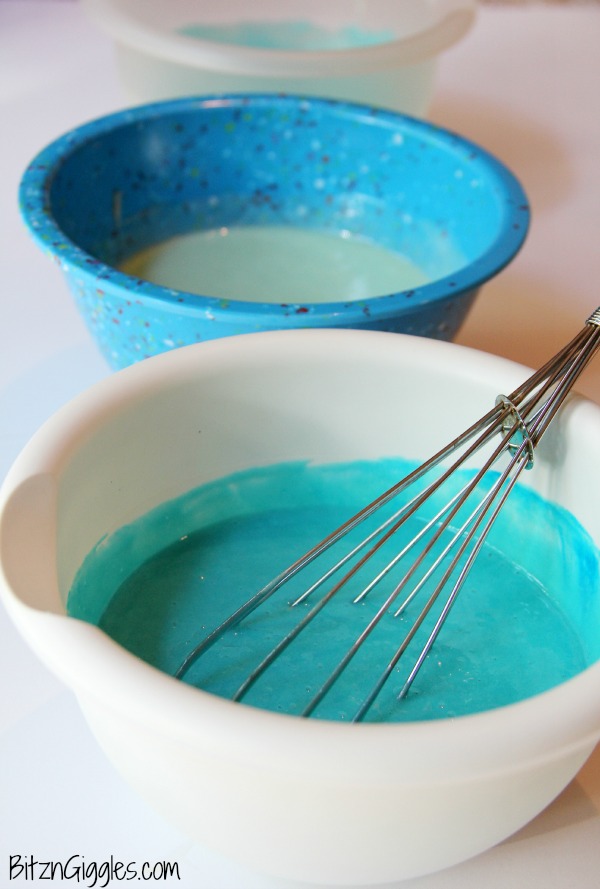 Once you have the colors whisked together in each of the bowls, get your cupcake pan ready. Once you have the liners in and you’ve sprayed them with nonstick baking spray, start adding the batter, one color at a time. Start with your darkest color batter for the bottom of the cupcake. Scoop about 1 tablespoon of the dark batter into each of the liners.

HERE’S THE SECRET. . .after each layer, use the back side of your spoon to smooth out the batter layer, making sure to spread the layer all the way to the edges of the liner. Do that for each layer working your way from dark to light. If you DON’T do the spoon step you’ll end up with more of the tie-dye effect I was talking about. 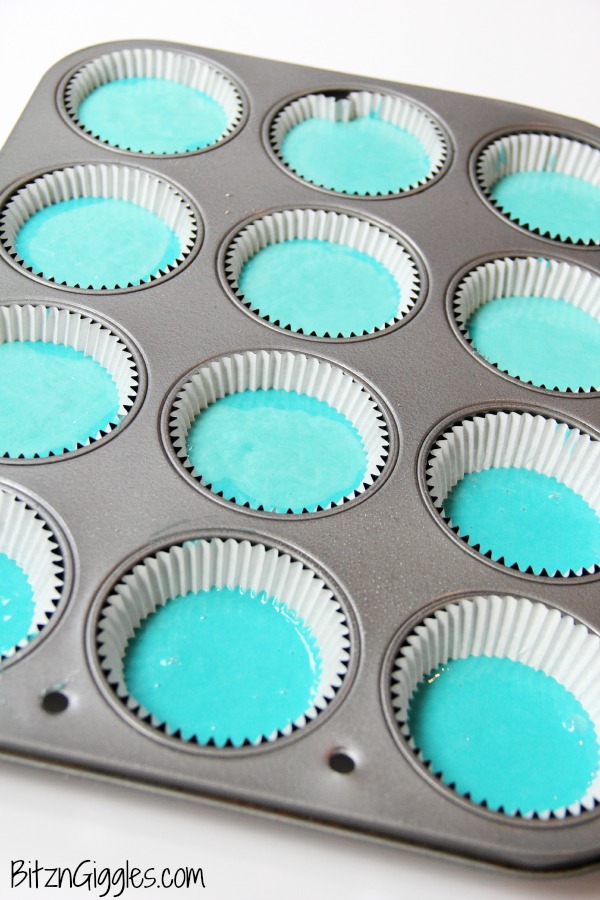 In the above photo, the liners closest to the bottom of the photo have just the dark layer, and as you move to the top of the photo, you’ll see that I added the middle layer at this step. Be careful how much batter you add. The liners should be about 2/3 full.

In the cupcakes I screwed up, I put too much batter in the cups for the first two layers and didn’t have enough room for the lightest layer – but I pushed it, and ended up with honkin’ big cupcakes that looked a bit like they had exploded. 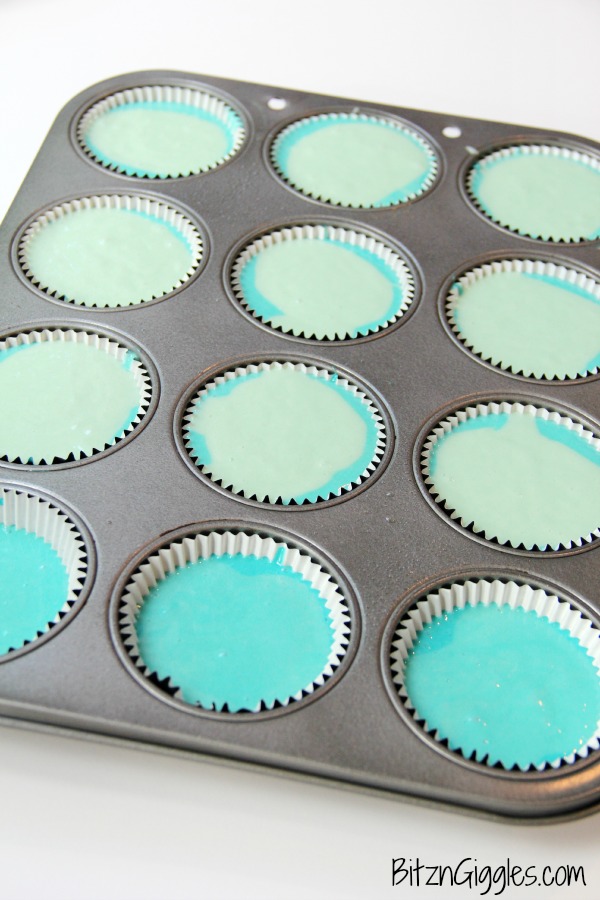 So, the photo above shows what NOT to do. If you look at the very top of the photo you’ll see that I had started adding the final light layer just kind of letting it spread out on it’s own. NOT a good idea if you’re going for the ombre effect. Also, NOT a good idea to fill the cups so full. I knew I was going to run into problems when I was placing these into the oven, but didn’t think they would come out looking like the mini atomic bombs, they did. 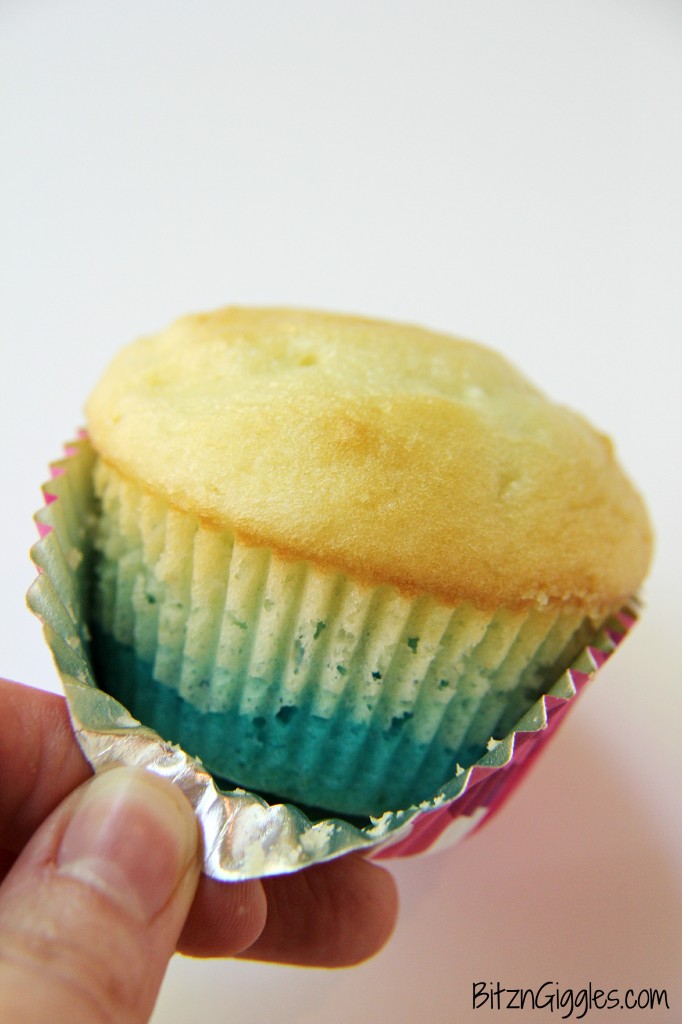 And there it was. How beautiful and fun is that? 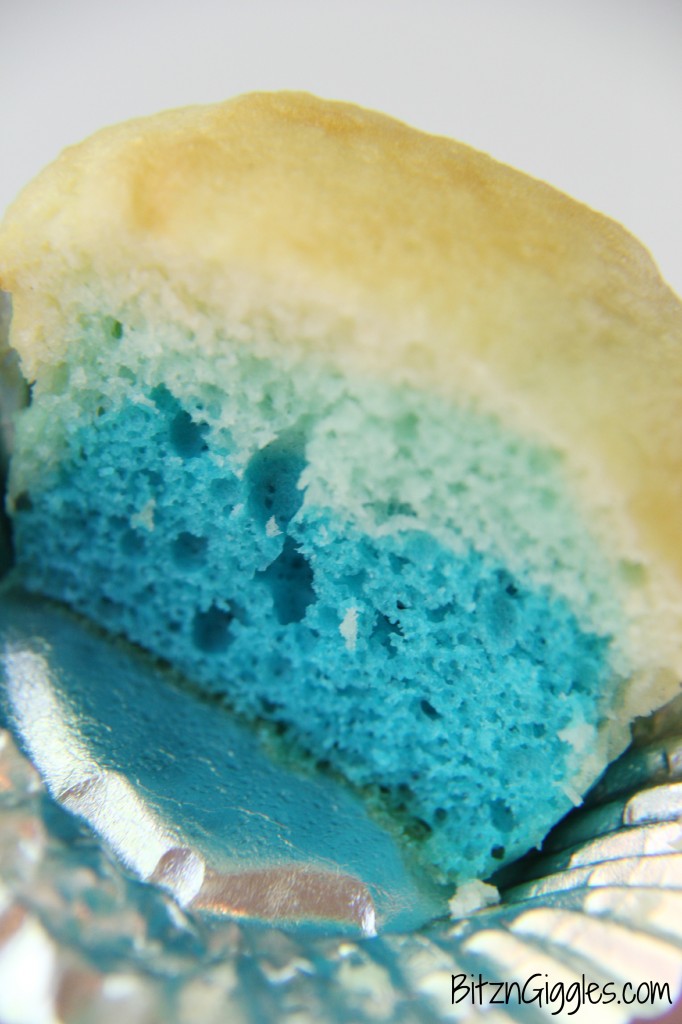 Want to see what I did with the cupcakes after this – why were they so special? Well, because I was making them for Dana and her readers over at This Silly Girl’s Life! I really decked them out and sweetened them to the max – adding some cotton candy frosting, rock candy crystals and a fluff of real cotton candy at the top! Cotton candy overload?

Are you kidding? In my opinion, you can NEVER have too much cotton candy! Head on over to This Silly Girl’s Life and check out these Cotton Candy Cupcakes. They were definitely worth the effort! 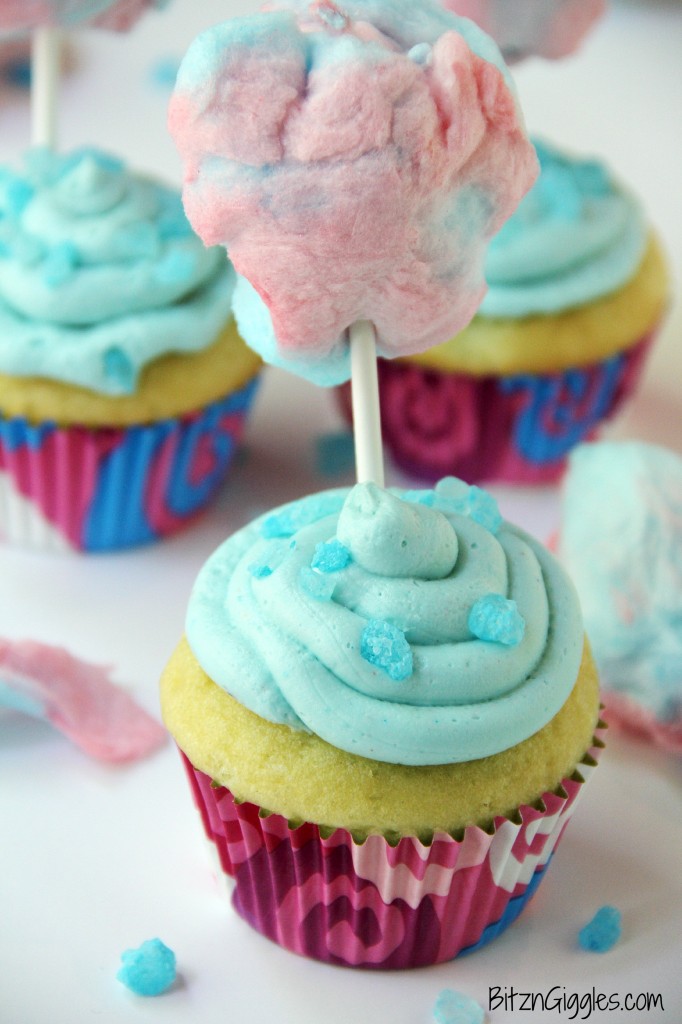