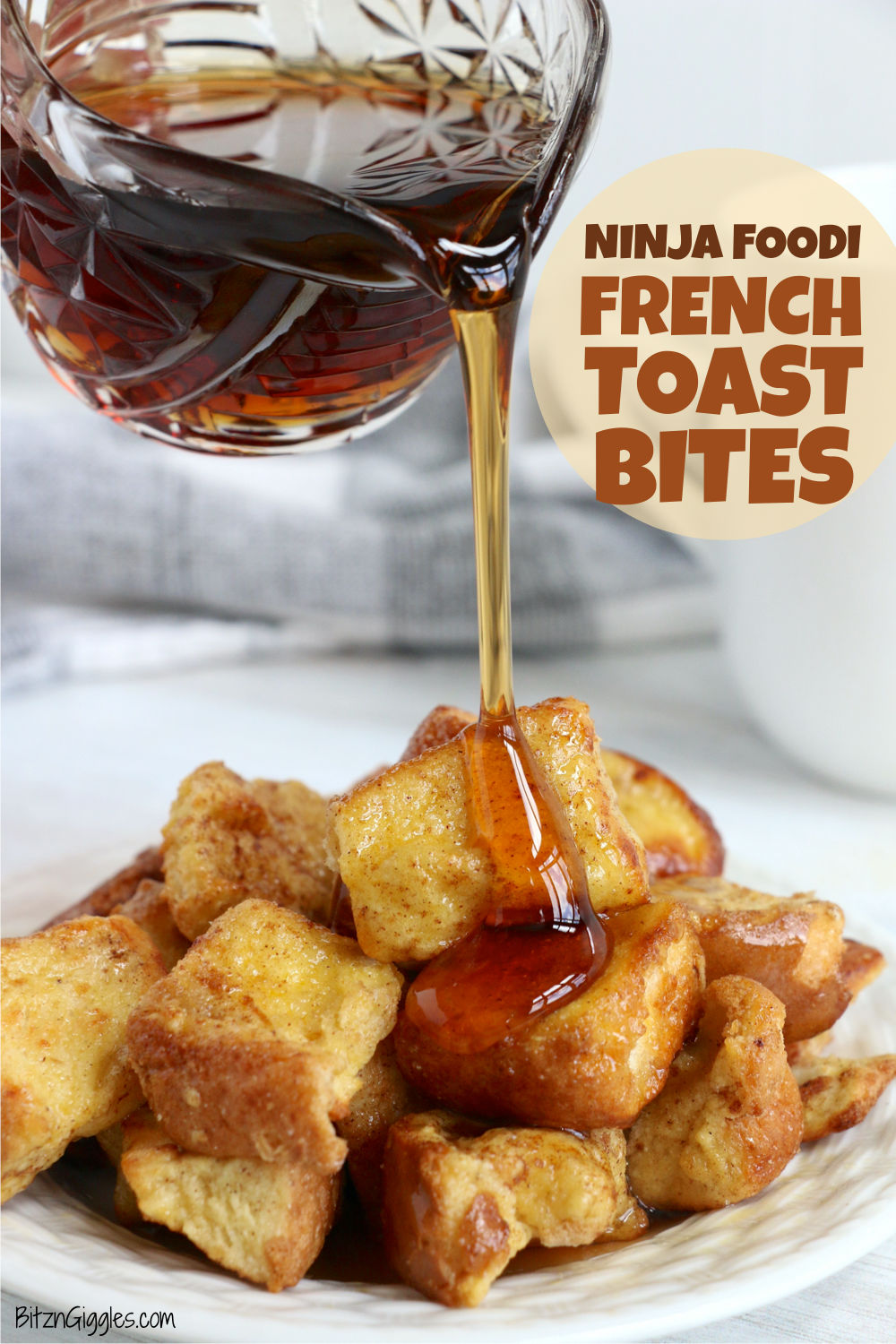 I don’t normally publish new blog posts on Wednesdays but today is an exception because this week is Christmas week! I’ll be taking some time off to spend with those I love the most and I sure hope you’re doing the same.

Merry Christmas from our family to yours!

On Christmas morning, one of our favorite things to do is have a hearty breakfast right after opening gifts. One of the breakfast foods that often shows up on the menu are these French Toast Bites made in the Ninja Foodi. If you don’t have a Foodi, you can also make them in an air fryer!

I take thick pieces of Brioche bread, dip them in a sweetened egg mixture, sprinkle on some cinnamon and sugar and air crisp them to perfection! They are SO delicious and a perfect way to celebrate on Christmas morning.

ARE YOU NEW TO THE NINJA FOODI PRESSURE COOKER?

If you’re a new Ninja Foodi pressure cooker owner and are still getting used to the appliance as well as pressure cooker lingo, check out my Ninja Foodi Beginner’s Guide that offers 30+ pages of tips and tricks to help you master the Ninja Foodi and have you cooking with confidence in no time at all!

Are you ready to get to cooking up some French Toast Bites? Let’s get started!

Begin by cutting half a loaf of Brioche bread into cubes. 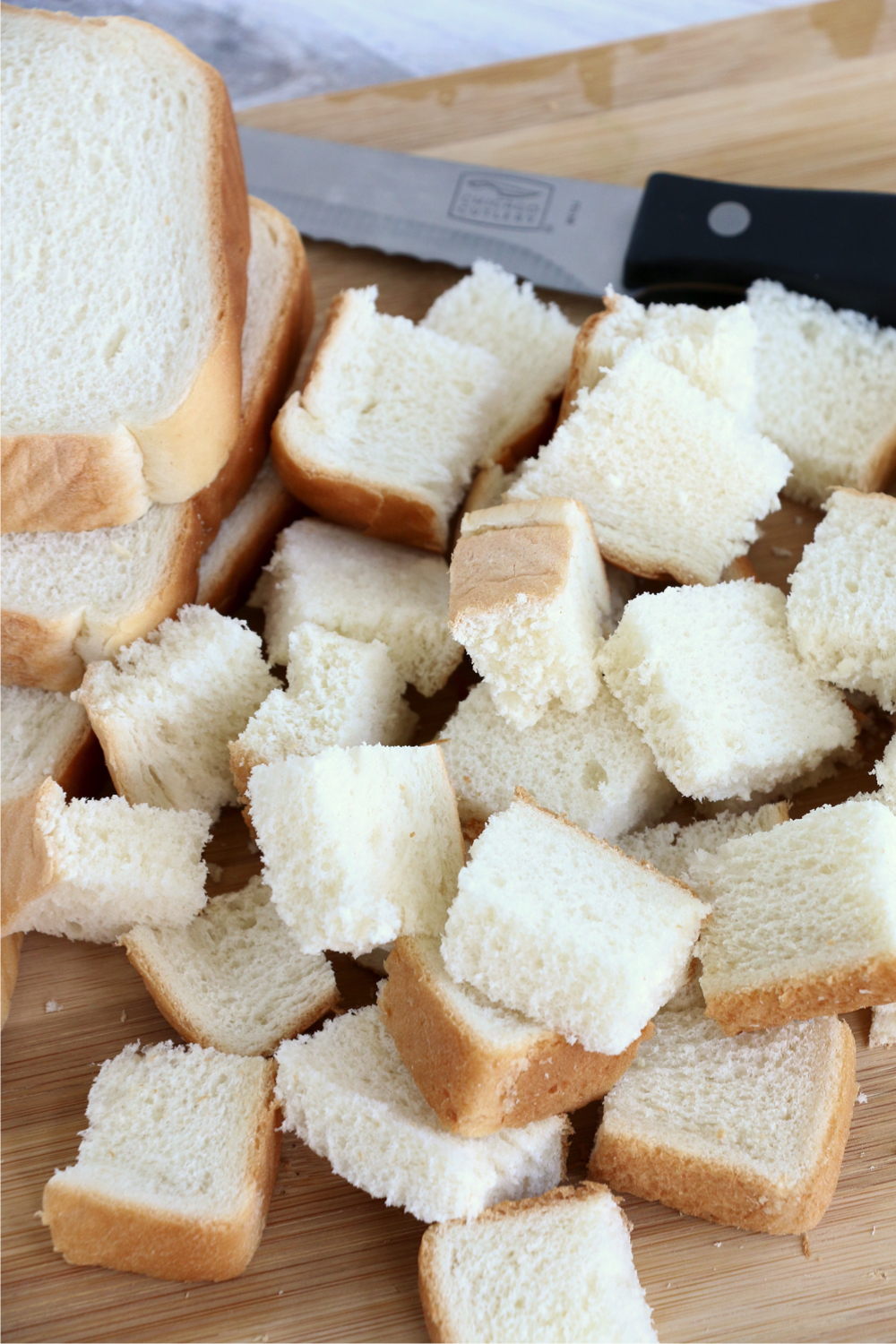 In a small bowl, combine eggs, milk, vanilla, and cinnamon. 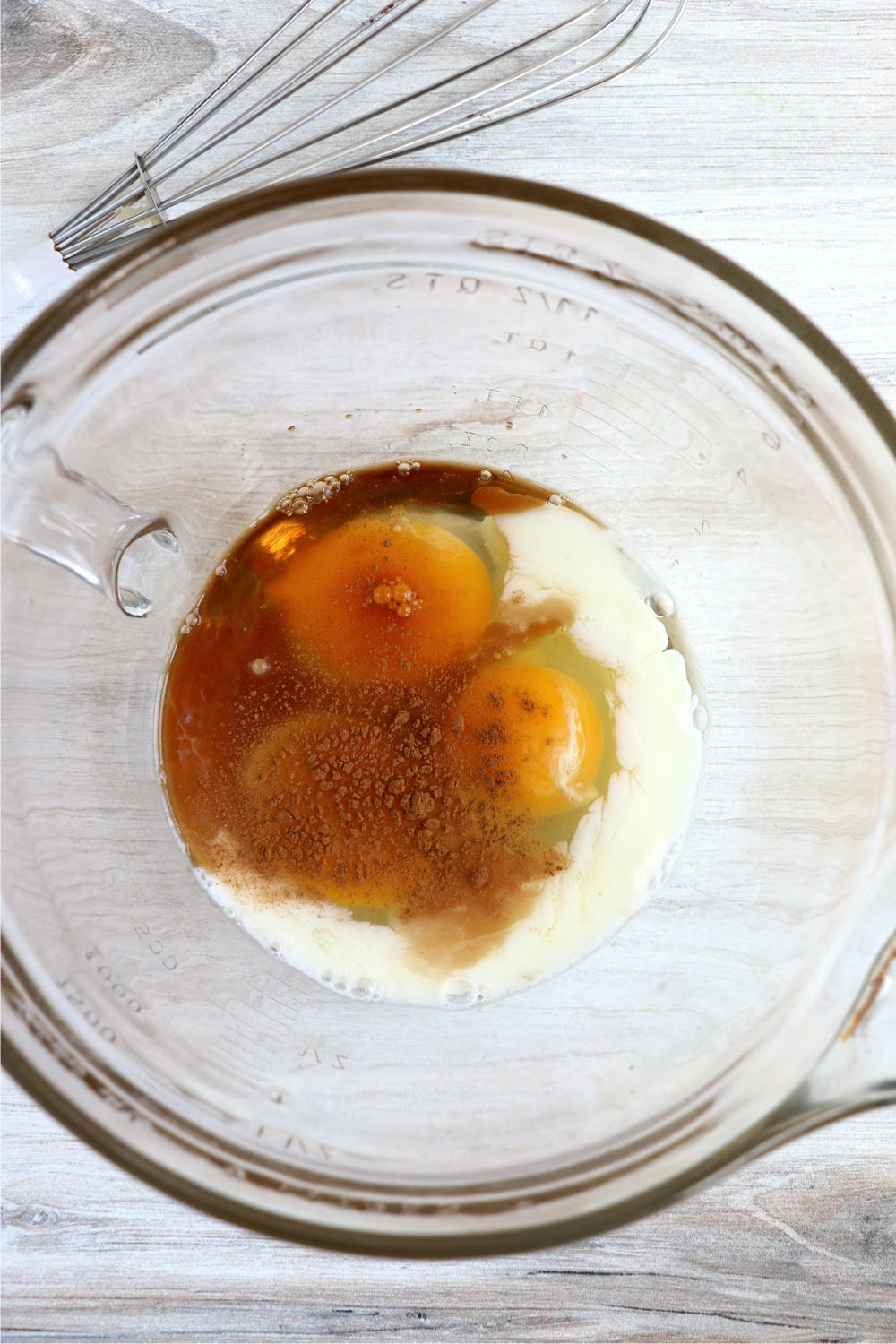 Pour the mixture over the bread pieces, and mix until coated. 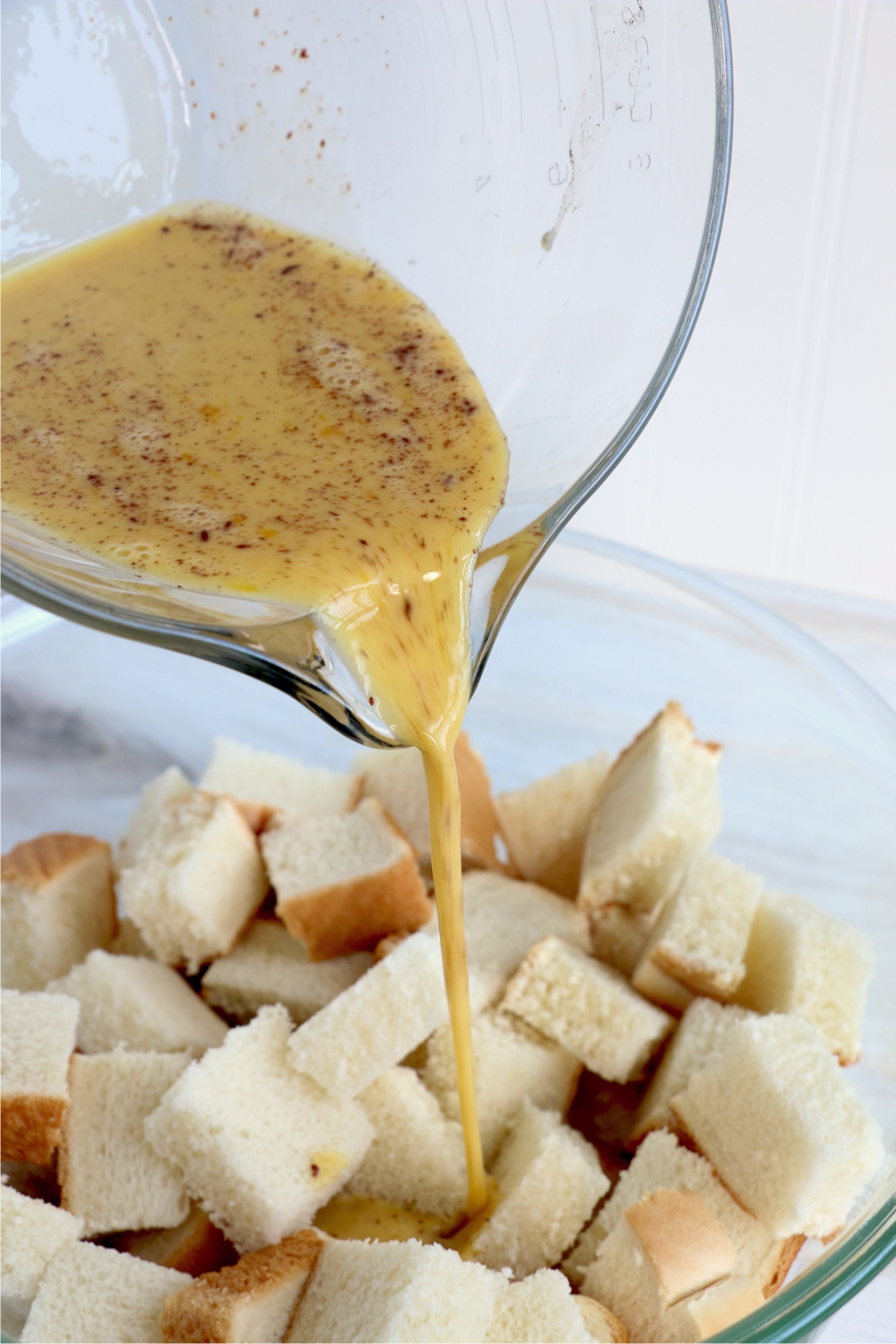 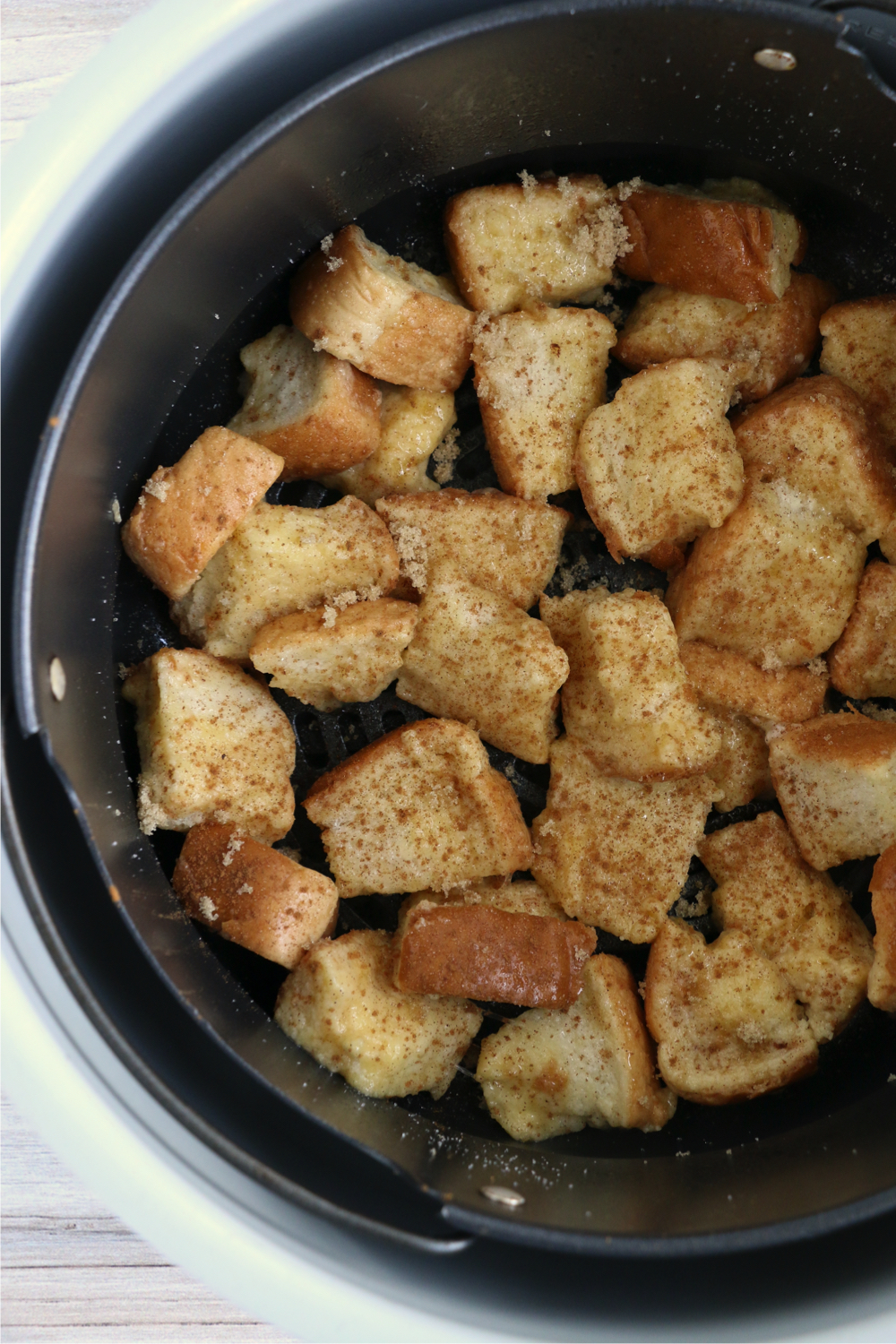 Air crisp for 10 minutes at 390º Fahrenheit, stirring or shaking the basket halfway through cooking time. 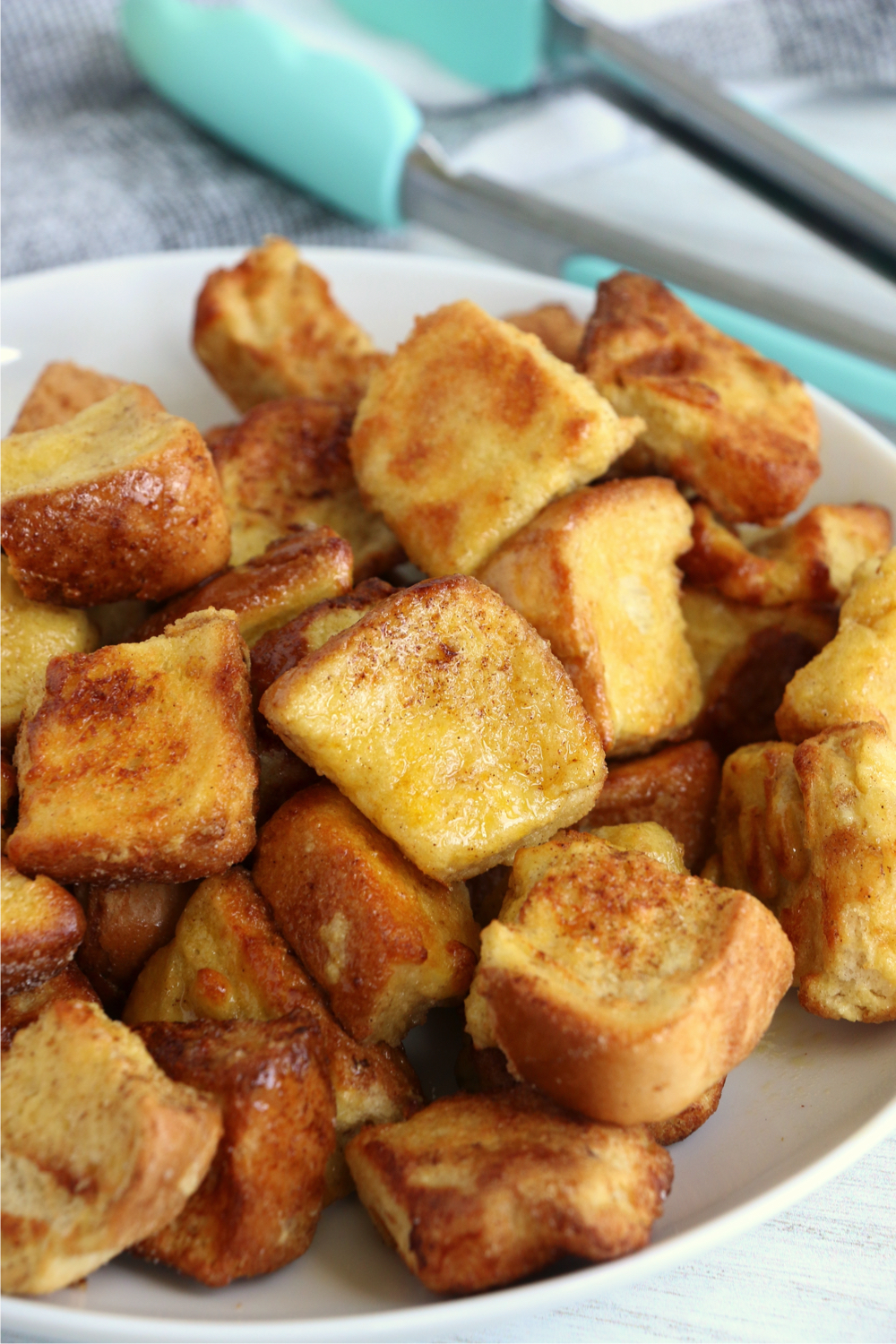 The bites are done when they’re a gorgeous golden brown. 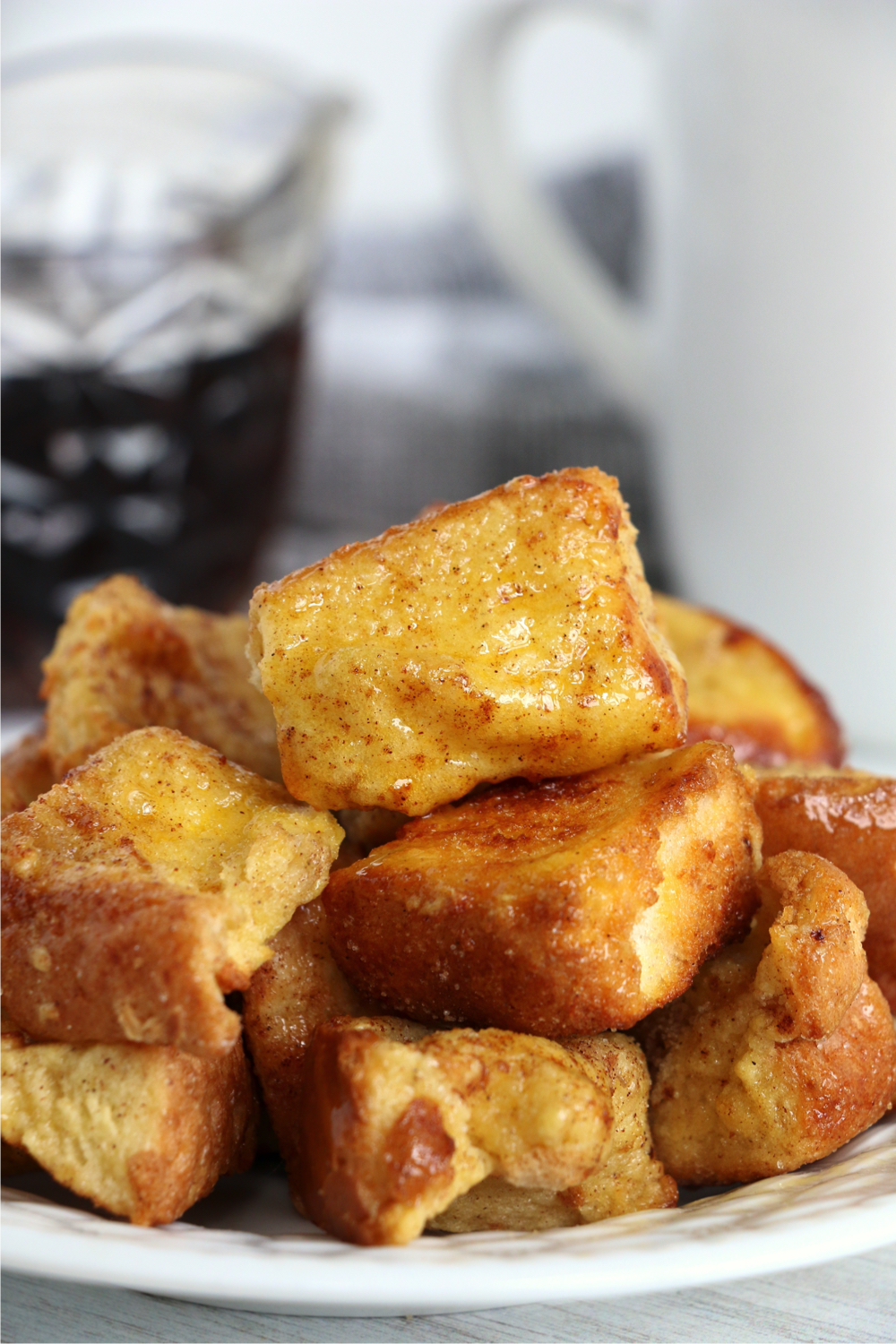 WHAT IS THE BEST BREAD FOR FRENCH TOAST BITES?

I’ve found that Brioche is the best bread for French Toast and French Toast Bites, however, if you want to try something else, here are some options: 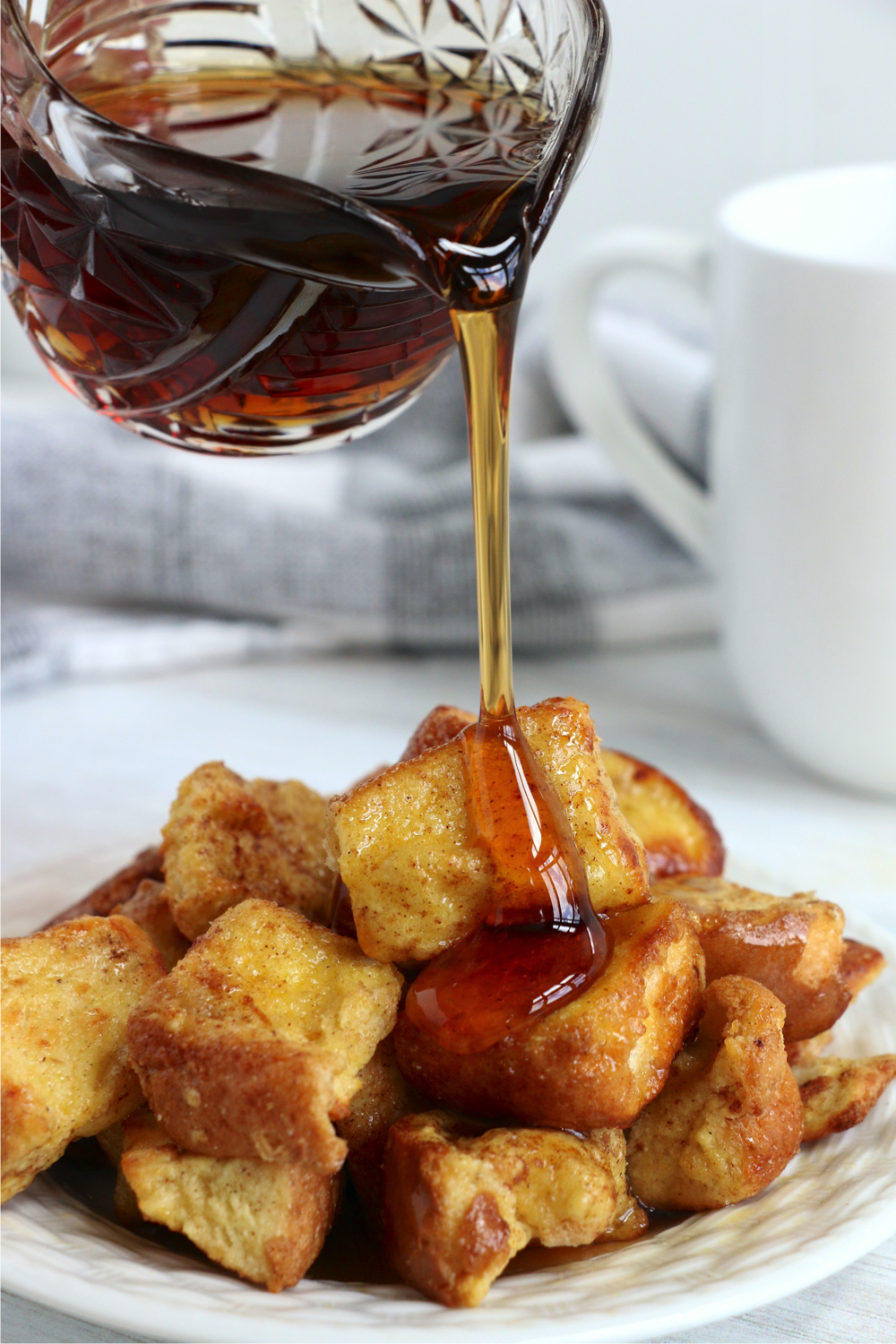 WHAT ARE THE BEST TOPPINGS FOR FRENCH TOAST BITES?

I just love drowning them in syrup, but you could lather on some whipped cream, top them with some fresh fruit or add a spoonful of peanut butter or Nutella! 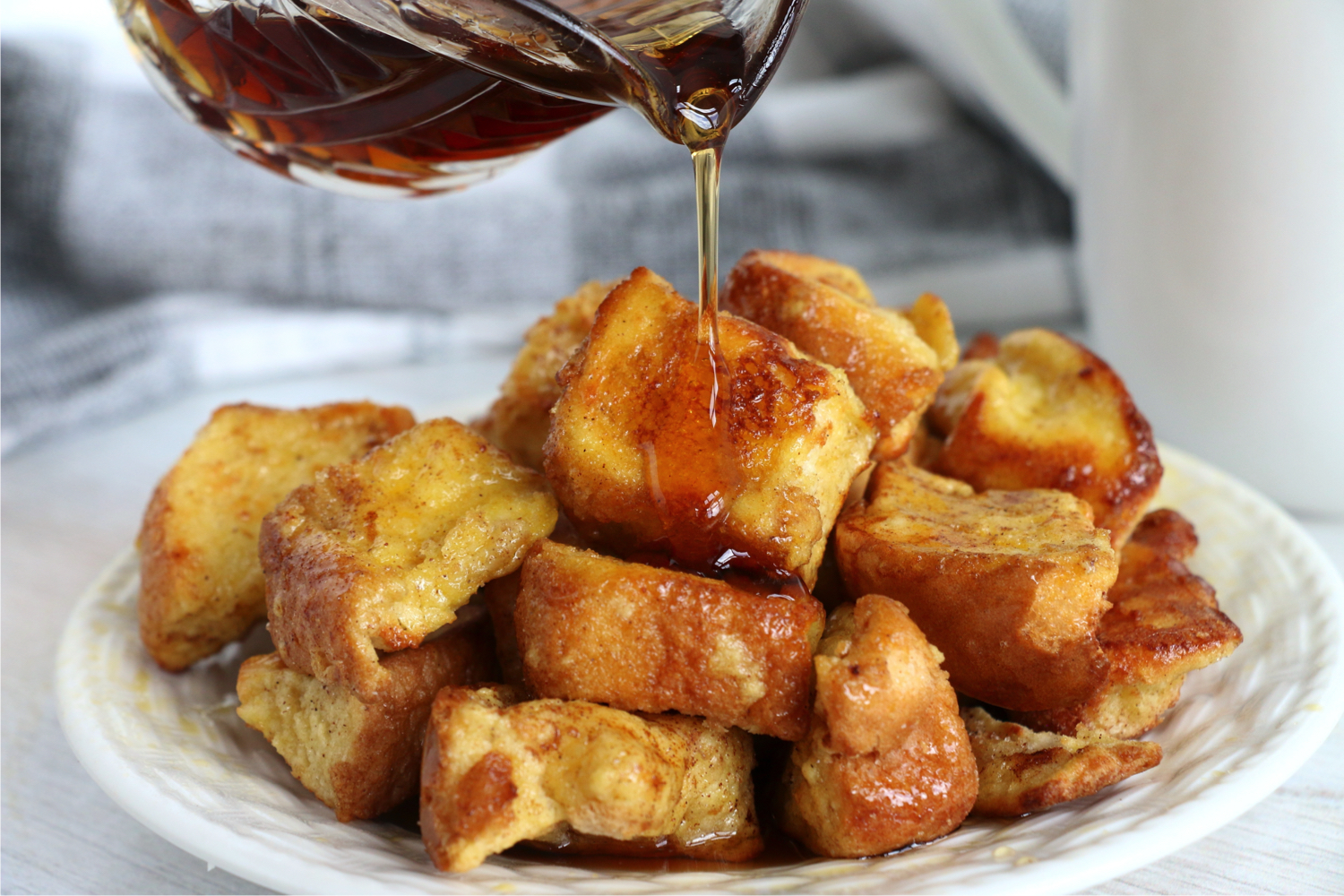 CAN YOU FREEZE FRENCH TOAST BITES?

Yes, allow the French Toast Bites cool completely and then place them in a freezer-safe bag. They will keep up to 6 months. 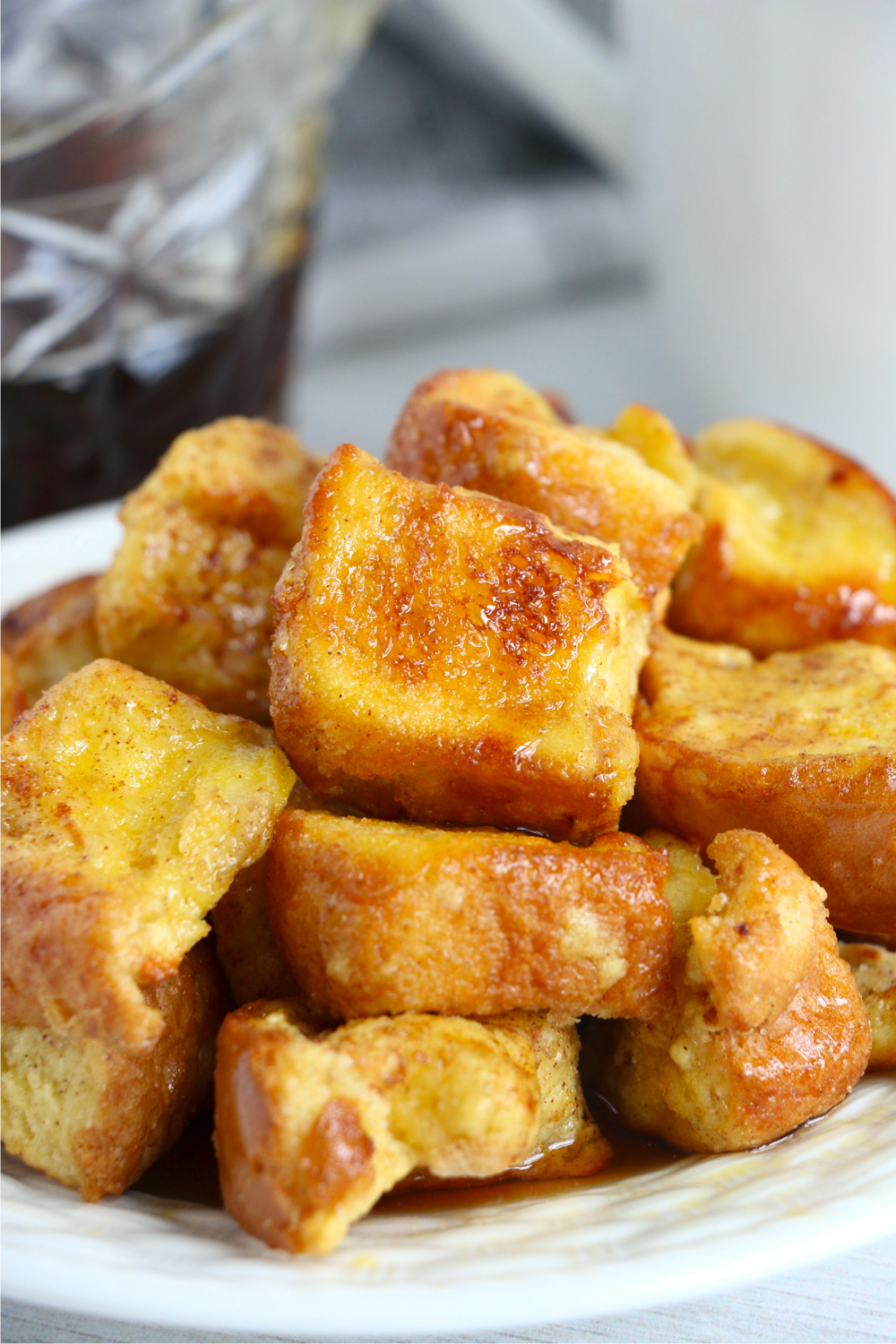 HOW DO YOU REHEAT FROZEN FRENCH TOAST BITES?

Place the frozen French Toast Bites in your Foodi basket and set to Air Crisp for 5 minutes at 400º Fahrenheit. Shake the basket halfway through cook time. 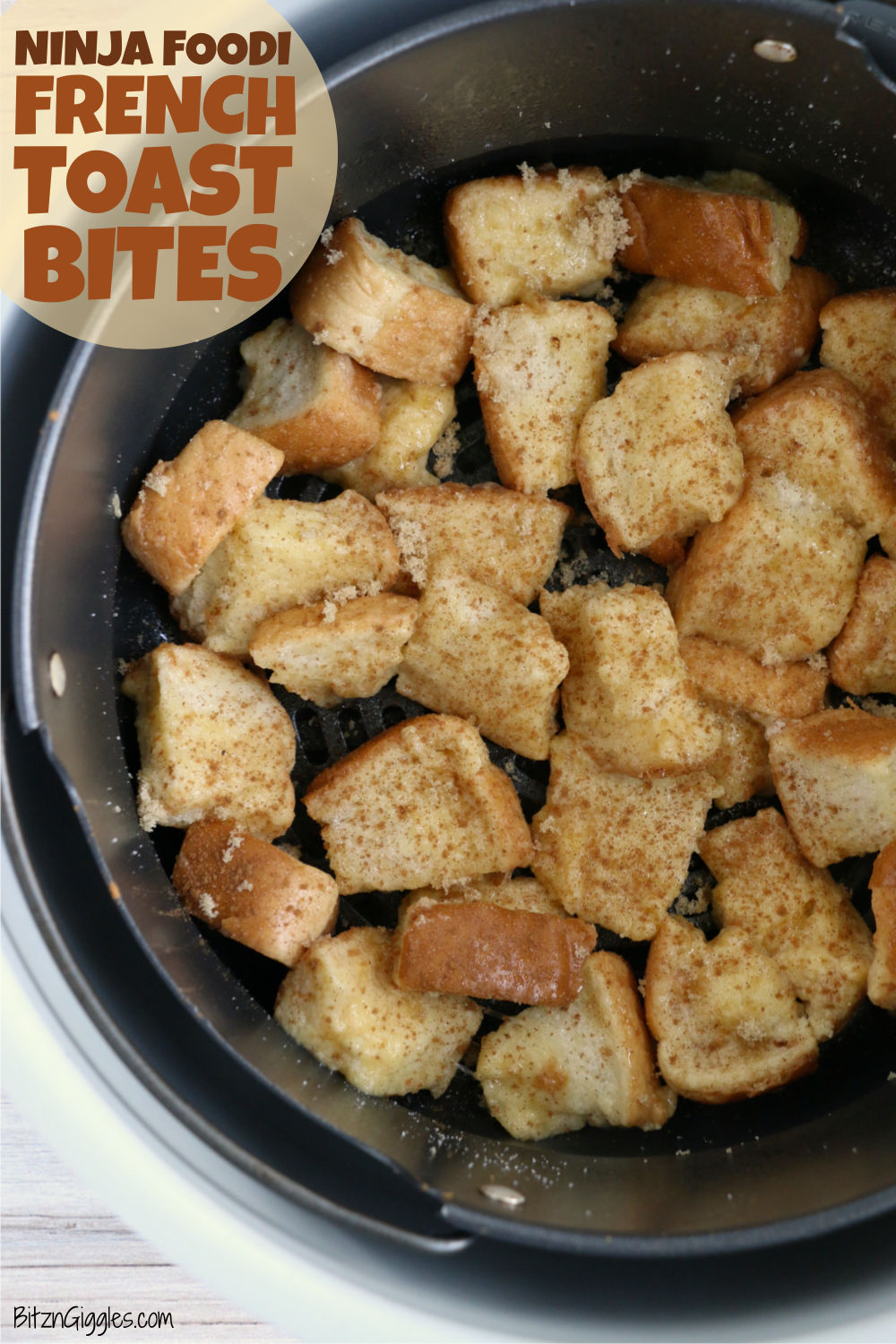 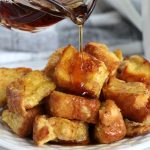 Sweet egg-soaked Brioche bread, sprinkled with cinnamon and sugar and air crisped to golden perfection in the Ninja Foodi.